Dongo is apprentice to Wabon. Although his job is generally to make rails and nails for mining carts, Dongo always wanted to sharpen weapons. Wabon does not allow this, and chastises Dongo for it. When the Prince brings Dongo a hammer and forges his weapon, Dongo realizes how much he wants to leave and forge for the Prince's army. Wabon fires him after this, and the dwarf apprentice joins the Prince's army. - Matt620 (article), Basel (image) 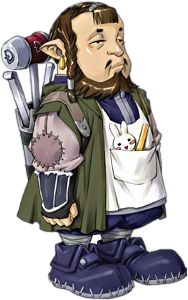