General Dinn commands the forces of Sable, and is the most trusted retainer of Lord Solis Raulbel. Dinn is level-headed and calm, much in contrast to the rowdy rambunctious General Wilde. Initially, General Dinn was allied with the Barows family, but after Salum's plan failed, Sable turned neutral and recalled General Dinn. When the Bandit Prince started his attacks on Sable, Dinn found it strange that he looked so much like the Prince. However, Dinn believed in the Prince's innocence, and teamed up with the real Prince to bring justice to them. After exposing Roy and Euram's plot, Dinn rejoined the Prince's army.

Dinn is favored by Salisha, Solis's daughter, and he serves her just as much as he serves her father. He finds it unusual that Isato and Mathias, who are in positions much like him, serve their ladies to the point of slavery, while, at the same time, not praising their beauty as women. After the war, Dinn returns to Sable. Eventually, he and Salisha are married. - Matt620 (article), Basel (image) 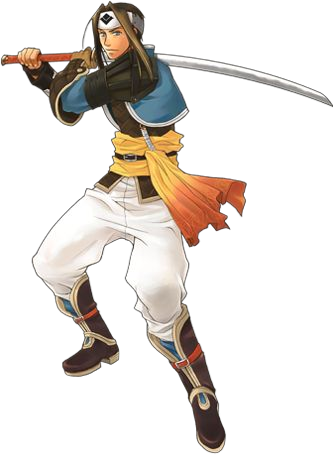