A member of the Howling Voice Guild, Cathari was well-acquainted with Lucretia Merces, Cathari traveled all the way to Falena because of Harmonia's interest in Falena, Armes, and Nagarea. She wanted to get to Sol-Falena initially, but because of the war, she couldn't. She bumped into the Prince, and had him take her to Lucretia, whom she hadn't seen in a decade. Cathari believes it would be in her interest not to let situations in Falena get out of hand, so she serves the Prince. Cathari, like many members of the Howling Voice Guild, uses guns, although she believes arrows are scarier because they've killed many more people and are more accurate. Cathari's tactics with guns are mainly bluffs, but she has to know how to use the gun inside and out in case the gun doesn't scare someone. 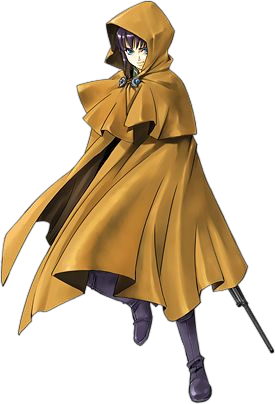