A travelling swordswoman, Hazuki comes from a family of sword instructors in her home country. She left on a journey to hone her skills, and the only person who beat her in combat was Belcoot. After her loss, she swore she would not return home until she beats him in battle.

Hazuki followed Belcoot to Falena, where he was functioning as a member of the Prince's army. When Belcoot told her this, she asked the Prince to order a duel, thinking Belcoot was a direct retainer of the Prince. However, Belcoot and the Prince have no such agreement. She apologizes to the Prince, and asks to join him as well. She wants to learn more of Belcoot's style, and figures there will always be time to duel him later. Hazuki is well-known in tournament circuits, and is acquainted with both Nikea and Gavaya. Gavaya insisted on being married to her, and she took great offense to it and drew her sword on him. - Matt620 (article), Basel (image) 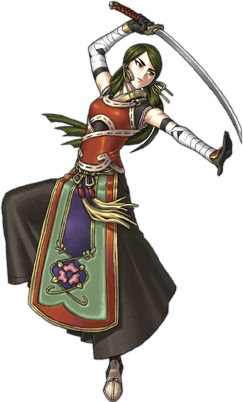