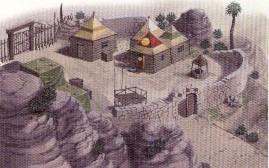 Iluya was virtually destroyed by a large Rune Cannon blast during the Island Liberation War. Iluya also served as a base for Kooluk's forces during the expansion. After the blast there was always rain around the Island that never stopped.

After the war, however, Iluya was rebuilt by survivors and Stars of Destiny of Hero IV's army, and was able to become a center of trade again after just a couple years.