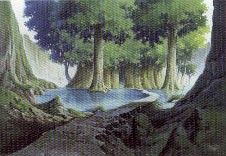 An island known for their strong warriors, Na-Nal contains two settlements, human and elven, that co-exist, although not very happily. Each settlement secludes themselves from the other, and there is much distrust. The island was taken over early into the Kooluk invasion during the Island Liberation War. However, the commander, Troy. took over the island very peacefully. It wasn't until the Island Nations army came in and attacked the Kooluk that Na-Nal was in trouble. Na-Nal planned to give the soldiers a powerful elven remedy, but the remedy turned out to be a toxic poison, a trick played by the elves to punish the leader of Na-Nal for selling the island, and the Kooluk attacked in retailiation. The Island Nations army defended Na-Nal, and after that Na-Nal pledged their support.