Koroku is one of the five dogs recruited into the Fire Bringer, and the only one with the honor of being a Star of Destiny. He was found at Mt. Hei-Tou, has a black scarf, and helps Cecile guard the castle; who in exchange writes his letters to the Flame Champion because, as a dog without opposable thumbs, Koroku cannot write. He once ate Guillaume's lunch, and was subsequently swung by the tail and thrown into the fountain by the appraiser. He also has an urge to pee on Nash, which causes Nash to avoid him. Also, if he is brought to Jeane, he can see her true form, which he is entrusted to keep secret. - KoRnholio 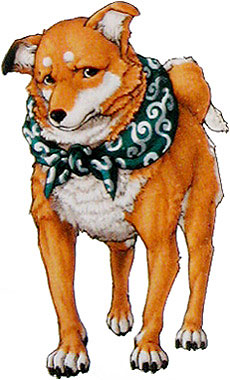