The Chief of Beaver Lodge, Fuwalafuwalu is a cheerful, energetic beaver who prefers a policy of non-interaction with humans. Although beavers are free to leave the lodge and associate with humans if they choose to, generally, the beavers stay put. The beavers were the ones who built the Hatred Fortress after the destruction of Lordlake, coerced by the Godwins in exchange for agreeing not to wipe them out. However, Fuwalafuwalu still felt badly about this, and agreed to help the Prince destroy the dam so that Lordlake's water can return. The beavers were sent to construct another dam between Hatred Fortress and Lordlake. The Prince's plan was to create a tsunami using the [Sindar] sluice gates in Ceras Lake, and the beaver's new dam would slow the water flow enough so that Lordlake wouldn't be swept away in the flood.

After the dam was constructed, Fuwalafuwalu returned with all the beavers back to Beaver Lodge, and ignored both the Prince's army and the Godwins. But the Godwins did not ignore them, and sent Dolph with some Nether Gate assassins to exterminate them. The lodge was lit on fire, but the Prince went to rescue the beavers. Realizing that their policy of non-intereference was what caused them to be surprise-attacked and nearly slaughtered, Fuwalafuwalu joins the Prince's army with the rest of the beavers.

Fuwalafuwalu is old for a beaver, the average life expetancy being only thirty years. Fuwalafuwalu's father lived to be over fifty, though, and knew Genoh, who was referred to as boss. After the war ends, Fuwalafuwalu passes away and his duties go to his assistant. - Matt620 (article), Basel (image) 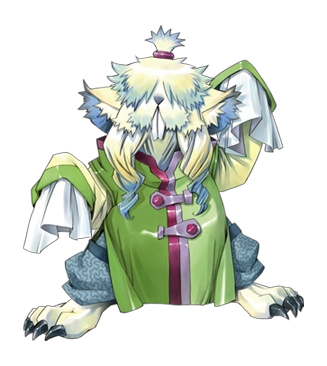