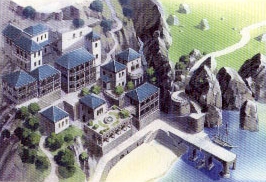 A peaceful island that attracted many older residents, and repels the younger ones (most of them leave to live a far more exciting life in Obel). Nay stayed out of the war between Kooluk and the Island Nations initially. However, after debris and residents from Iluya displaced from the Rune Cannon blast washed up on the shores of Nay, they agreed to help the Island Nations Army fight Kooluk.