Granddaughter of the Kooluk Emperor Julius and next in line for the throne after her father, Prince Martin.

She first meets Kyril's party in Merseto when they intervene on an abusive merchant attacking his child employees. They next meet after Iskas seduces Miranda away and tries to kidnap Corselia. She runs, and is lucky to run into Kyril, who saves her and makes Iskas flee. She travels with them, and grows attached to Kyril while evading her father, aunt, and uncle who are still under Iskas' trickery and think Kyril kidnapped her. She finally convinces her father of this at the Mido Shallows.

When Martin leaves to confront Iskas, she runs after him with Kyril, but is too late. She is attacked by the fishmonster who used to be Martin, who is killed by Kyril. She also has to see her mother die at Iskas' hands when she betrays him. She helps Kyril defeat Iskas, but when the palace is crumbling, and Kyril jumps in the portal of energy instead of fleeing with the rest of the party, she is heartbroken, thinking he would surely be dead.

Soon, however, when he emerged from the rubble, she was reunited with him. Now in control of the Empire, she decided it was now too broken to try and revive, and simply dissolved it, as her grandfather had suggested in death. She comes back and lives in the Scarlet Moon Empire with most of her old friends.

When Kyril disappears, she goes looking for him, but soon comes to the conclusion that he simply doesn't want to be found. - KoRnholio (article), Basel (image) 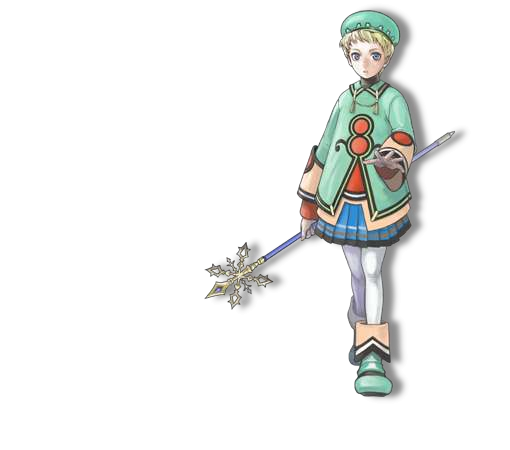