A playboy Queen's Knight, Kyle is known to be a real ladies man and chases all of the women in sight. Despite his carefree attitude, he is quite capable of being serious, and when crossed, he is an expert at both swordsmanship and magic runes.

Kyle was born in Lelcar, but became an orphan quickly. He was raised by Volga. His flirtatous tendencies started at a young age, and his life was either flirting with the girls or beating his sparring partners.

About 10 years previously, Kyle got into serious trouble for flirting with Lord de Beers adoptive daughter. He packed his bags and left, drifting aimlessly until the Armes invasion, where he became a volunteer soldier. His performance was spectacular, spectacular enough to catch the eye of Ferid, who allowed him to become a Queen's Knight.

Kyle clashes with Alenia on political views. Alenia is a supporter of using the Sun Rune aggressively, while Kyle is not. Because of this, Kyle is often thought of as a supporter of Barows, but this is not true. Kyle also doesn't get along with Zahhak, as his uptight attitude about rules and belief that Kyle's views are criticism of Arshtat rub Kyle the wrong way.

Because Kyle is seen as a supporter of Barows, he does not accompany the royal family to Stormfist, home of the Godwin faction. He requests to Ferid that he be allowed to accompany the Prince and Lym to Lunas, but Ferid refuses. This confuses the Prince, but he quickly realizes the truth when the Prince realizes Lym's purification ritual is basically a cold-water bath. Kyle would have traded his life for one chance to see Sialeeds in that bath.

Kyle is an instrumental part of the Prince's escape from Sol-Falena. After he and Sialeeds are beaten by Dolph and Childerich, Kyle and the gladiator Zegai fight off the two to allow the royals a chance to fall back and escape. After this, Kyle and Zegai split up, with Kyle going to the Sealed Room, where the Sun Rune returns after the death of Arshtat, and escape with either it or Lym. However, he is unable to accomplish these.

Eventually, Kyle flees the castle, and overhears that the Prince had joined up with Lord Barows and fought against the Godwins. Kyle went over to see this for himself. The Prince welcomes him with open arms, glad to see he is alright. He apologizes for being unable to help more, but the Prince forgives him.

Kyle joins with the Prince, and goes with him after he discovers the treachery of Barows. He serves the Prince faithfully, but never stops flirting with the ladies. He rather fancies Lelei and Luserina. However, he always has a soft spot for Sialeeds. Before she defects to the Godwin side, she explains to Kyle why she is doing the things she is. However, he is told to keep it a secret, and he acts like he was never told about it, even if the Prince asks him about it. 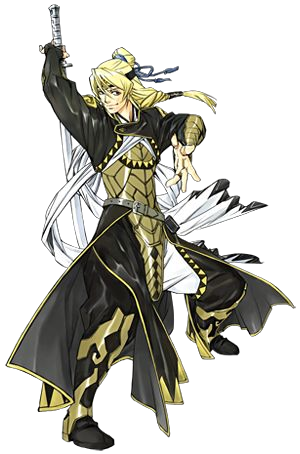