Logg is Kisara's husband and Lun's father, and known to be a jack-of-all-trades, one of Raftfleet's most capable men. He is most well-known for being a magnificent sailor, inbedding a Flow Rune into his ship to make it the fastest ship in all of Raftfleet.

When he was younger, Logg was a smuggler, who got criminals out of jail for a price, and gladiators who wanted freedom out of Stormfist. He sprung Gunde's father from jail, and the two have been friends ever since. Logg's partner in crime was Haleth, who forged fake IDs and passports to get criminals out of the country once Logg busted them out. Logg didn't just smuggle human cargo, he brought in all sorts of contraband, getting Haleth to fudge the cargo receipt in exchange for a bribe.

Logg and Kisara's romance started out very quiet. Their engagement was announced quite suddenly; no one had even known that had seen each other. Apparently though, it was very difficult to get Kisara to agree to wed.

When Admiral Raja gave the order to collect raw gold, Logg thought of the idea to collect some gold dust from Lunas, as no one would be up there. His daughter Lun initially was against it, but he explained to her how easy it would be and she got excited too. While in Lunas, they tried to sift the gold at night so they wouldn't be seen, but they needed to use a lamp to see the gold. Isato and the Prince saw the lamp and investigated, catching the thieves.

Isato wanted to punish the two, but Sialeeds knew that such an act would make Raftfleet angry at the royal family, so she resolved to take the two to Raftfleet and have Raja punish them.

After this, the people of Raftfleet join the Prince's cause, and Logg helps ferry the Prince across the Feitas to all of his destinations. Logg's other war-notable achievements are making the oil-bearing ship crash into Hatred Fortress in a spectacular fashion.

Logg tries to be a good father to Lun, but it never goes well, due to Lun's outspokenness and brashness, not to mention Logg's bungling. He envies Retso for having such a kind and well-behaved daughter. Logg also tries to be sweet to Kisara during the war, treating her to expensive wine, but she instantly suspects that he's gotten back into smuggling. After the war, he attempts every so often to visit Lun at Sauronix Castle, but it never goes as well as he planned. - Matt620 (article), Basel (image) 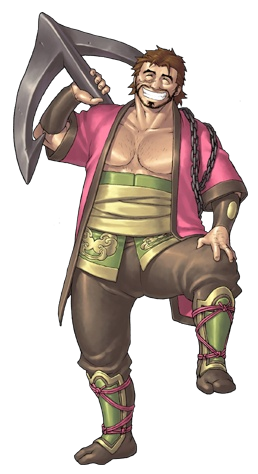