Remote linking to avatars
Do not link to Suikosource images on forums, webpages, or anyplace else. If you wish to use the images, place them in your own webspace. We do not allow you to use them from our server.
Suikogaiden, Volume 1: Chapter 4: War's End and Beginning
Defend Greenhill when Highland attempts to invade. We all know how it turns out... 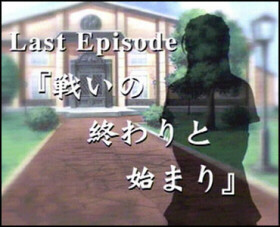 2 3 4 - You awaken to someone giving you a massage *boggle* It's the inn maid, Yuli. Who informs you that you were found unconscious in the back forests of Greenhill.

32 33 34 35 36 37 38 - You are taken to the mayor's office. There you're released - apparently the guards were just a little too overzealous. You're given the option of escaping or helping out. If you escape Shin helps you through the back woods. Before you say goodbye, Shin attacks you (img #38 - backdrop is the woods). Shin asks you to reconsider. If you persist in running away, game ends.

41 - Nash is assigned to organize the troops. The troops don't think he's up for the task...

42 - Any questions on Nash's competence? No? Good. Thought so.

43 44 45 46 47 48 49 - Organizing the citizenry and soldiers to tasks. Jude makes spears. Jeane and Connell volunteer their knowledge of runes. They are assigned the duty of converting Runes into scrolls.

50 51 52 53 - Work goes on into the night. Jude has finished the spears. Connell reports that they're running low on runes. Theresa authorises them to remove runes from stores.

63 - The second wave is with Magic. Connell tries to use high level scrolls without success...

64 65 - If Nash tries, he fails the first two tries. Finally, Jeane intercedes to lend her power to him. Talk about compromising positions...

64b 65b - If you call for someone else... Someone has followed Connell up. The man offers his assistance. Without effort, he uses the scroll. Nash asks who he is. Kahn tells Nash that he's heard of him from Sierra. Phew what a relief. Nash leaves the usage of high level scrolls - ressurect, heal and others that are designed to rejeuvenate the troops to Kahn.

67 68 69 - During the barrage of enemy arrows, if you hope that someone will step in to save Theresa, comes... sir speedy to her rescue.

70 71 72 73 74 75 - Preparing for a full frontal cavalry assault. But the Highland troop movements are too skilled. Too precise... they are apprentice class gunners masquerading as Highland Troops

76 77 - Meanwhile, there's a disturbance and if you call out 'who's there', Georg Prime comes to your rescue.

78 - Meanwhile, Jowy is coordinating the freeing of the Muse Soldiers.

80 81 82 - You find out that Matilda will not send in their forces... however there is a ray of hope shining.... Muse Soldiers are at the gates.

83 - However, things are close to explosion inside Greenhill. Supplies are dwindling. The Muse Soldiers have taken control of the supplies and have children as hostage. Theresa gives herself up in exchange for the children's freedom. She also declares that Greenhill will surrender.

84 - A ghost from the past, "Are you going to run away again?" When he looks it's Yuli with the others. They intend to free Theresa.

85 86 8788 89 90 - Bustout time... Nash and Shin lead the attack. Connell causes havoc with the sound crystal. Jean with her lightning crystal. They take a secret route with Emilia and Jude running decoy.

95 - A figure from his past catches up with him once more.