The apprentice to Professor Babbage, Sorensen is a kind, affable fellow who has to put up with the frustrating antics of those around him. Professor Babbage requires Sorensen to do all the housework in exchange for teaching him his contraptions. Sorensen does this willingly, he doesn't gripe about it even when Bergen and Dongo discuss how the faults of their masters. However, he does gripe to the Prince that, because he spends so much time cleaning (having recently been giving the assignment of doing the dishes) that Lu acts more like the apprentice.

Sorensen accompanies the Professor to sabotage the Revolving Bridge. After the bridge is sabotaged, Babbage sends Sorensen to build devices for the Prince. Sorensen is always stuck cleaning up after the Professor's and Lu's messes, and often doesn't feel like the apprentice anymore. However, Babbage does ask Sorensen to go to the [Sindar] Ruins in the Ashtwal Mountains and see how it works. Sorensen makes the harsh, lonely trek to study them. - Matt620 (article), Basel (image) 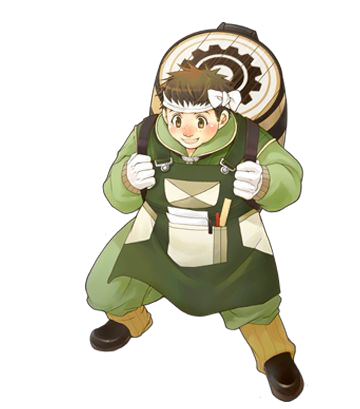