The only child of Logg and Kisara, Lun is an energetic young girl who assists her father in the many things he does around Raftfleet.

As a child, Lun was friends of a sort with Subala, until Lun stole Subala's first boyfriend. However, Lun claims she doesn't remember anything like that.

Although Lun seeks to emulate her mother and be good like her, she usually ends up acting like her father. He talked her into stealing gold from Lunas, and the two were subsequently caught. They were returned to Raftfleet and Kisara, where Lun was punished because she was old enough to know better. Unlike her father, Lun did not try to talk her way out of punishment.

After the Godwin takeover of the country, Lun felt indebted to the Prince, because, if she was in the castle as a prisoner when the Godwins took over, she might not have made it out alive, assuming they weren't executed before that for defiling Lunas. Because Raftfleet women always repay their debts twice over, Lun felt obligated to help the Prince in any of his endeavors, even if Raftfleet itself wasn't allied with the Prince's caused. She accompanied the Prince to Lordlake personally, and decided to go with him to Agate Prison to spring Lucretia Merces from jail.

After busting her out, Lun returned to Raftfleet and aided in her hometown's defense. She joined with the Prince's army when Raftfleet pledged their cause. After the war ended, Lun joins the Dragon Horse Cavalry when their ranks open to women, and becomes the first female dragon horse rider. - Matt620 (article), Basel (image) 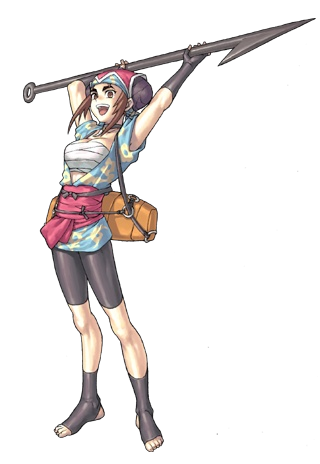