Along with Cius, Lelei is one of two guards assigned to watch Lucretia Merces. She has an infatuation with Lucretia, and protects her vigorously from anyone who could hurt her. To prove herself to Lelei, Lyon even gave up her weapon to be allowed entrance to meet Lucretia.

Lelei was taught military strategy by Lucretia, but she quickly realizes her inadequacy during Lelcar when she fails to predict Zahhak would set the town on fire to cover his retreat. Lelei apologizes in front of Lucretia, who tells her never to make an apology in public, because it will cause people to doubt a strategist's effectiveness.

Lelei is known to be a tall woman, and other girls admire this. However, Lelei herself wishes she was a little shorter, and stoops whenever she can. - Matt620 (article), Basel (image) 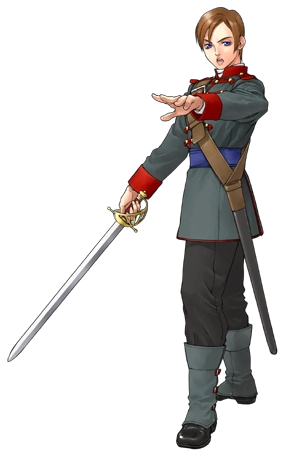