Murad is a doctor whose specialization lies in drugs: both in detecting them and creating antidotes to them. He was first seen in Stormfist working in the Sacred Games, where he would examine the losers if it is suspected that some of the competitors attempt to cheat by drugging their competition and make them lose, since the Rune Keepers prevent cheating through magic. Despite his amazing expertise, he cannot detect the drug Dark Arcanum, because it is odorless and tasteless. Only Lyon's prior knowledge of the drug could detect it.

After the Games, Murad is brought to Sol-Falena by Ferid to craft an antidote to Dark Arcanum for use in Ferid's counterplot to the Godwins. Murad does his job perfectly, but the castle still falls.

After this, Murad goes from town to town, treating the injured. The Prince asks him to join several times, but Murad refuses, claiming a doctor must remain neutral. However, when he sees the brutality of the Godwin war, he decides he can't remain neutral and joins the Prince's army.

Murad and Silva used to work together decades previously, and he figured there wouldn't be much to do with her around, but he was wrong. He concots many antidotes, including one to Raging Nostrum. However, because those who take Raging Nostrum usually do so willingly, it's difficult to administer the antidote.

After the war, Murad helps himself to the many leftover drugs from Nether Gate to make more antidotes and medicines. - Matt620 (article), Basel (image) 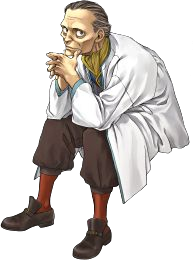