A traveling martial artist, Nikea is a cheerful and oblivious woman who lives for the next fighting contest. She is actually quite skilled at fighting, making enough money to live off the prizes those tournaments give. She comes to Falena hearing about the Sacred Games, and decides to enter. She didn't realize women were forbidden to compete. She protests this, since, in Falena, women have the power. She didn't even know that the prize, aside from fame and glory, was that the winner would marry the Princess.

Most martial arts champions are serious, but Nikea is cheerful, bubbly, and boisterous, almost all of the time. Sialeeds almost wishes Nikea was a man, because, if she was married to Lym, there would always be something interesting going on. Georg comments that she would be a very ineffective Commander of the Queen's Knights, although she would be better then Euram.

Nikea was hired by Orok of Lelcar to serve as his bodyguard. When the Prince, Lyon, and Kyle break in to find the kidnapped conscripted boys, Nikea comes up to fight, but the Prince beats her. She goes to Estrise, and the Prince meets her there. He asks her to join, and she accepts, if she can fight him in a one-on-one duel. He beats her, and she joins as promised, lending her "super-duper special moves" to his army.

Nikea's cheerful attitude leads Lyon to comment that sometimes, looking at her, it doesn't seem to be there's a war going on.

In addition to fighting, Nikea's other vice is food. Oboro and Retso both wonder why Nikea doesn't just make her living in eating contests. - Matt620 (article), Basel (image) 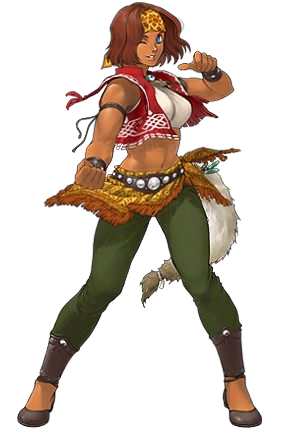